April 26, 2010
When I say that our sidewalk project took months (MONTHS), I'm not lying. It was ongoing for the majority of our marriage. When I bought the house, the path off the back of the porch was paved with red flagstones, a weird rectangle of smaller grey concrete rectangles, more flagstones, and weeds. I hated this area. Didn't like the weeds. Didn't like the materials. Didn't like that it was HUGE.

Besides the shear amount of work I knew this project would be, it was delayed because I waffled on what I wanted in the flagstones' place. Hubby found great, grey, brick-sized pavers that I thought would go well with the house. And they were on sale. Woohoo!

Hubby dug out all the stones. We decided where we wanted the new path to be (helping us extend the garden and the lawn a little bit). And then the weather got bad. It rained. It was cold. It rained some more. This lasted for months. MONTHS. It slowly made me insane as we park the cars near this entrance to the porch. The entrance that was a giant mud pit. Hubby, trying to calm my insanity, tossed a few makeshift stepping stones down so that I wouldn't have to tightrope walk down the wooden edging to get to my car. You know, when wearing heels, dressed for work, and slightly off-balance with luggage.

So, praise tiny baby Jesus. Winter finally ended here and we were able to move forward. This was the first paving project for both of us. It was a lot. Of. Work. Moving dirt, leveling, creating edging, leveling, putting down weedcloth, tons of gravel, leveling, sand, leveling, bricks, leveling, more sand. Holy moly. So much prep work and everyone knows that's the least fun part of any project. I have to tell you, though, that making any progress on this project was thrilling. Even the layer of gravel was a huge improvement. 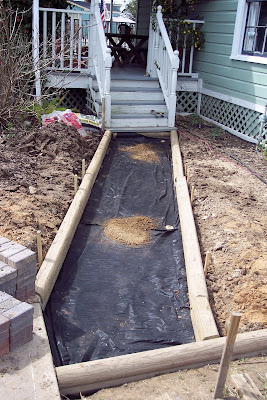 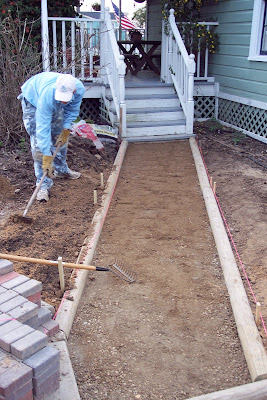 Turns out that some contractor bought out all the grey pavers that we had wanted to use. From all the local stores... So we ended up having to mix red and grey. At first I was disappointed because I hated that red flagstone so much. I think I just wanted nothing to be similar to it. After I started laying the pavers, though, I decided it looks better than it would have if it were all grey. I couldn't be happier with how this turned out. Sometimes we walk on it because it's there. We're not even going anywhere. It's like a stationary sidewalk. A stationary sidewalk of JOY. 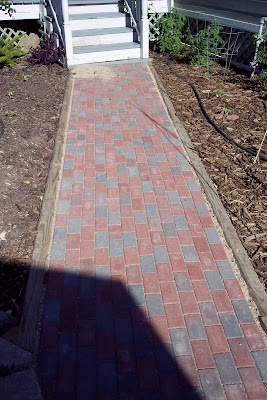 Sigh... I lurve it. And it was a project we did together. And both of us survived! With our extra garden space, I've planted some peas and squash in addition to our 3 varieties of tomatoes, strawberries, and 2 kinds of peppers. The watermelon and cantaloupe are on the opposite side of the walk. 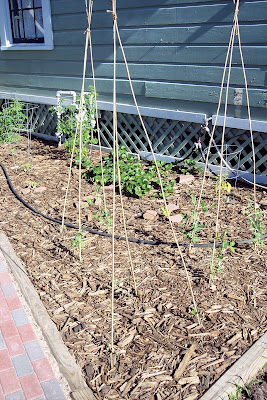 Those are pea teepees! And here are our tomatoes--heirloom, cherry, and just plain ol' tomatoes. All of them are producing! 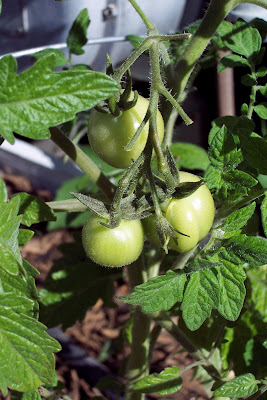 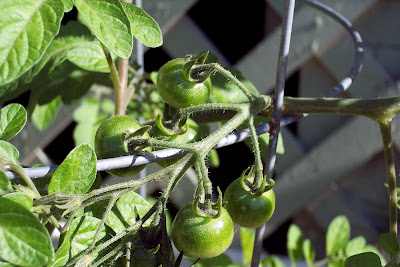 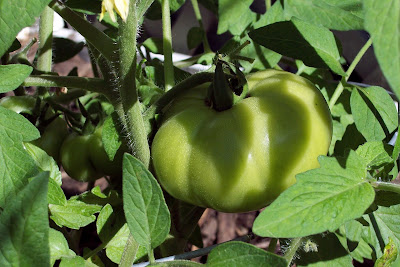 We've done a lot of work in the beds lately. I've given up on a few plants just being dormant. The multiple freezes we had this winter killed a few things. Now only living things are in the ground and the few plants that haven't started blooming are on the verge. The lantana? No one told it that it almost didn't make it. It's happy as a clam. 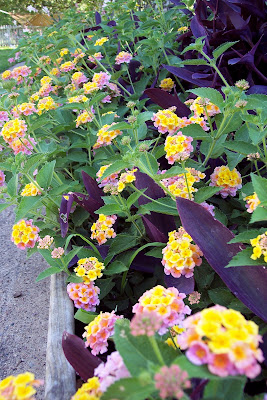 Scott said…
I'm glad you and W did a paver project. You can advise us with ours. We're putting a walkway with a bench in our front flower bed (the one that takes up half the front yard). Good lord, I thought it would be a one- or two-weekend project. Shows my naivetee.
5/12/2010 10:03 PM