January 02, 2011
After a very productive week/weekend, the nursery is just about done. I think the only thing I want to do is whip up a simple padded headboard and Hubby needs to trim down the legs on a little footstool. That's it! Finally! So without further ado...

(And I'll apologize right off the bat for having some wonky-colored photographs in this post. I just don't have the energy to fix things. At least on my monitor, the above pic is roughly true-to-life.)

Would you like to see that awesome rug a little better? 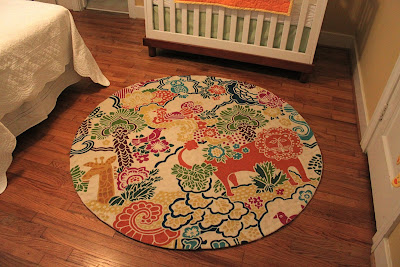 Man, I love it. It was the one splurge for the room but it has such great colors, fun animals and designs, and is round. All my criteria were met. Love.

Here's the corner with the crib. I wanted a clean, simple, modern, white crib. I hate to admit it but we ordered it from Wal-Mart. Hey, at least we didn't have to enter an actual store to get it. It was inexpensive, is quite sturdy, adjusts to a toddler bed, came with a highly-rated mattress, and had 98 cent delivery. 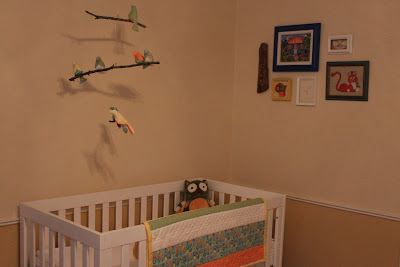 I think I've shown you these details before but I'll force them on you again. First, the mobile I made. Love the little birds. And second, the collection of fun artwork. 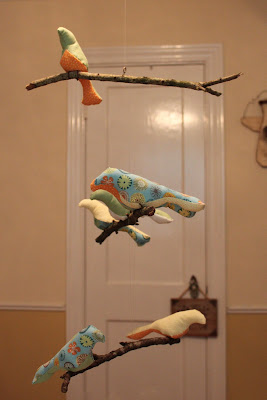 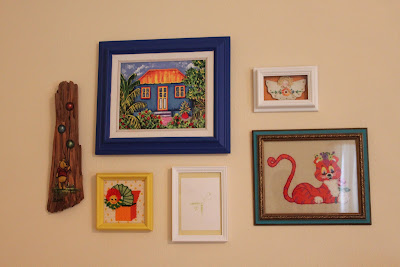 So starting with the big blue house and working clockwise, we have the big blue house that Hubby brought back from a past vacation. Then an angel that was given to me by one of my fake moms years ago. I've changed up the frame and the angel's background at least 3 times to fit with changing decor but I think it's so cute. The angel is made of vintage, embroidered linen (like a pillowcase or tablecloth). Next, the tiger needlework that my grandmother made (Dad made the frame and I painted part of it to fit better with the room). Then Bebe's first card (a picture of peas and it says "sweet pea"). The last two items (the clown and the Pooh driftwood) were both in Hubby's nursery when he was a little one. I love that it's such a crazy mix that somehow works together. That it's sentimental doesn't hurt either.

To the left of the crib and on the other side of the door to the bathroom, is a little bookshelf area. I switched out what bookshelf I wanted to put here multiple times. This one came from my office. I didn't take a picture of it but the inside back of the shelves are "wallpapered" with multi-colored striped paper just for fun. While some of these books were mine, Bebe did get many of them as gifts. I painted the previously gold mirror a brighter orange than it looks here. Got it from my neighbor's garage sale. The lamp was one I had but painted it, bought a new shade, and added some fun orange, ball trim. Miscellaneous stuff on the blue nightstand (that Hubby picked up for free in college and I painted and stenciled). 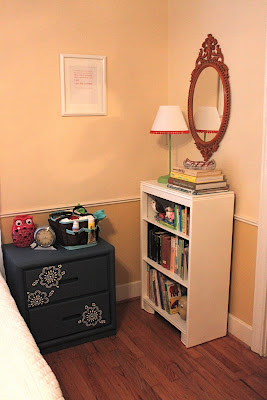 And what's that on the wall? It's part of the song lyrics to that song that made me bawl early on in my pregnancy. I think I mentioned that in a weekly post at some point. I figured if it made me have such a strong reaction, I should include it in some way. So I printed it up and put it in yet another painted frame that I had lying around. (What can I say? I'm cheap and green.) 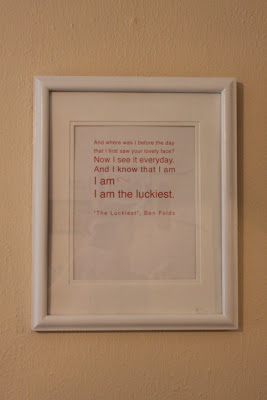 On the other side of the bed (symmetry and all) is another framed piece I printed out that lists all the places the baby has traveled so far (except for Austin...totally forgot it and may one day add it in). 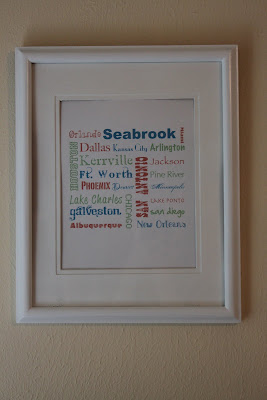 And here's the twin bed I finally caved and added. We originally had a full-sized bed in here but it was just too crowded. I didn't really want a bed at all but since Hubby got a job, I figured I we should have one since the baby and I may be spending more nights downstairs early on so that he can get some sleep. My MIL was kind enough to trade beds with us for the time being so we got this one set up today. Bedding is re-used from the full bed, pillow by my grandmother, valance by me. 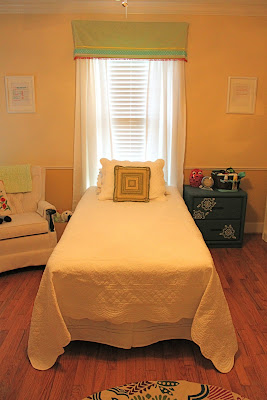 Here's the rocking chair again, now in its proper home. I love this chair. I'm so glad we got to use it. It's fun to think that I'll be the one doing the rocking in it this time around (instead of being rocked). The reupholstering of this piece was by far the most expensive part of this super frugal room but worth every penny. 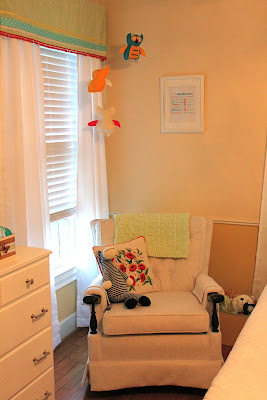 In/on the rocking chair is another pillow by my grandma, an afghan knitted by Hubby's 99.9-year-old grandmother, and this cute zebra gifted by Bebe's auntie: 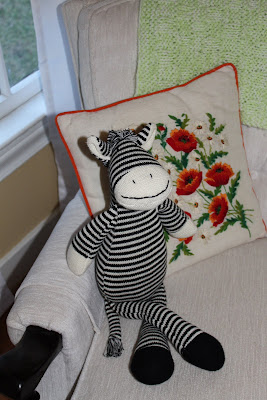 And what's that hanging from the ceiling? Some super cute owls! One of my friends made these for the baby and actually included two more owls and two trees. All of them were meant to be grouped together as a mobile. Because they're so cute, I felt like I needed to spread them out a bit more throughout the nursery and adjacent bathroom. These 3 guys are hanging above the chair and I expect Bebe will enjoy looking up at them. 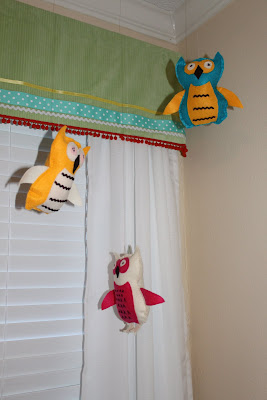 And that brings us around to the last wall which, again, I kinda love. Wall shelves that I've had for years that got a fresh coat of paint and the over 50-year-old dresser (gifted to my parents by my dad's parents for their wedding) that got several coats of paint and new hardware (and really cute drawer liners that I didn't take a picture of). 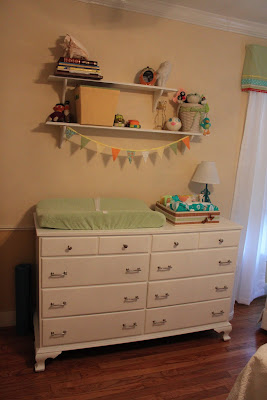 The basket to the right of the changing pad was the same one that held programs, maps, etc. at our wedding. The lamp is another one that I repainted and re-shaded (also trimmed the shade with white rickrack). 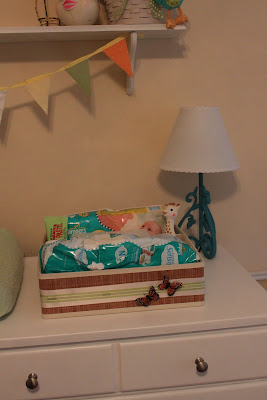 The shelves are filled with some new items for the baby as well as some old toys that were mine. There's a conch shell from Hubby's travels, some books I don't want Bebe to read by him/herself, and fun little bunting made by me (out of quilt scraps). 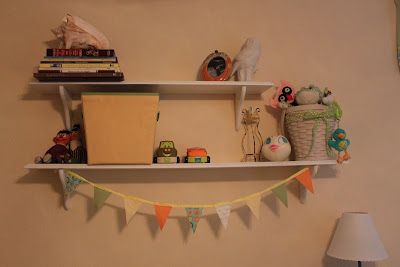 Given my frequent use of the word "love" in this post, you can probably tell that I'm pretty pleased with how everything turned out. My vision of lots of white with pops of fun, bright colors was achieved, I think. I put more work into this room than any other in the house redo. It's been a lot of fun but has been such a slow process that I was kind of starting to get bored with it and doubt my choices. But seeing it all come together this weekend has been pretty exciting. I'm so glad to have it done before the baby's debut!

Helen@Creative-baby-nursery-rooms.com said…
That's so pretty! I love your nursery!

Please come and enter it in our nursery contest- you could win $250 and I would love to add a photo of your nursery to the baby rooms gallery too.

Anonymous said…
the nursery looks amazing!! can't wait to see it in person!

I know you must be crazy busy with baby stuff and work stuff, but I had a totally self serving question. My husband and I are taking my mother in law on a trip to Ireland late summer/early fall. I just reread all of your honeymoon posts and I was wondering if you had anything else to add? Your favorite places, places you wouldn't miss for the world, etc. I think we're going to to the B&B thing too because my husband and his mom want to do a lot of ancestor searching, etc so we'll be traveling around a lot.

I totally understand if you're crazy busy, but if you have a second, I'd love your first hand opinion.

You can email me at lbourque at gmail dot com.