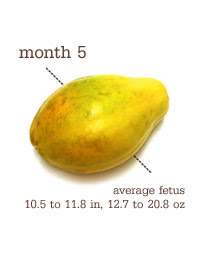 Total weight gain: About 16 pounds. Broke into a number I've never seen before in the tens place...
Movement: Daily flutterings. Sometimes you can see them happening. Very subtle from the outside but stronger on the inside.
Cravings: Not much this week. After I got my hair cut yesterday I was lured in by the smell of nachos.
Symptoms: Crazy dreams, baby brain, forgetfulness, side stitches (usually from not being able to change positions). For the first time I had those pesky nighttime leg cramps. They weren't really what I was expecting. Just one calf, cramped pretty strongly. I had read various ways people got rid of them but the best and easiest (especially if you're traveling solo) is to just point your toes up toward your shin (the opposite of the ballerina toe point). It hurts to force yourself to do this but then immediately relieves the cramp. I wish all pain were so easily remedied (for me at least). Another first is that I had a little swelling in my feet after my flight home from Miami. Went away by getting off of them but this doesn't make me super excited for the San Diego trip this week (except that I love San Diego and am very much looking forward to the cooler weather).
Belly button: No change. Formerly pregnant ladies, did yours pop out? If so, did it go back in post-baby? I can't believe I've never asked anyone that before.

Preparations: I rearranged some things in the nursery. Hung some art. Have finished the quilt except for the binding. Almost finished the valances. Started painting some shelves but finished the picture frames. Honestly, it's just exciting to see a few things in place in the room. Bebe (who may be called Bubbles now because of tacky, juvenile jokes from his/her parents) also got a few super cute articles of clothing from his/her aunty. Said aunty pointed out that there is no gender-neutral name for niece/nephew, no category (like son/daughter can be "child" or brother/sister can be "sibling"). So Bebe/Bubbles is the niece-phew. Finally, I got some maternity pants in the mail from katielady. Huge thanks to her! Work pants! Jeans! Capris! Cords! Looking forwards to wearing them. (Actually, wore one pair last night and packed another for the week.)
Milestones: So much for believing it is obvious to people that I'm pregnant. If you know me, it seems like you can tell but if you didn't know me before you would be surprised to hear I'm 22 weeks along. New co-workers couldn't believe it this week. But they were all very nice and chatty (in mostly happy ways) about pregnancy. It was nice. 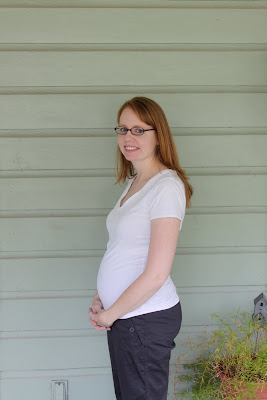 Weekly wisdom: When people find out that you're pregnant, they will ask you when you're due, what you're having, if it's your first baby, what you're naming the baby, and how you've been feeling. This is all fine and good. I don't mind answering any of those questions (even though some do not have very satisfying answers at this point). I say come up with something creative. "What's been your favorite part about pregnancy?" "Any fun baby brain stories?" (That one is particularly entertaining because I think everyone has them.) If you can think of anything else creative, let me know.

Two bonus things. 1) The fruit analogy is now applying to multiple weeks at a time. Papaya will be around for two more weeks. And 2) bonus picture of Hubby and Maggie. This is how she curled up next to him. She loves her some daddy. 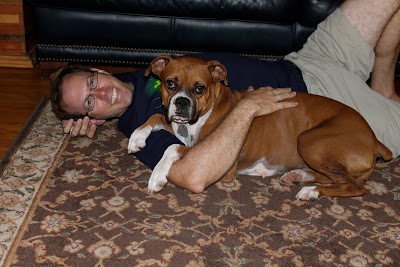 Well, I'm off yet again today (and by "off" I of course mean "leaving" instead of "not working"). At least for a few days I'll be gone for leisure. Then gone for work. Will finally get home on Thursday. I can't tell you how much I'm looking forward to that (and not just because Friday=day off, facial, and massage).

angelq said…
The belly button goes through multiple stages. Innie, then flat, then outie. And, yes, it does eventually go back in post pregnancy. However, I think how long that takes is dependant on how big you got.
9/18/2010 10:13 AM

angelq said…
Oh, and I highly recommend trying to take a 30 minute walk a couple of times a week. This significantly reduced the amount of swelling I had with Lucy vs. Ainsley.
9/18/2010 10:15 AM

Three Peas said…
Lucky, my feet already started swelling...and my bump is bigger even though I'm only 19 weeks! So strange how everyone differs...I realized I couldn't see my feet today. Sad, sad, sad moment.
9/18/2010 8:45 PM

The Schoeneman's said…
Mine popped out with both pregnancies. Mine went back in after Hunter but not after Evan. It is half in and out now. Don't ask, I know it sounds strange. :) I also second the walking thing - helps a lot!
By the way, you look GREAT!!!
9/21/2010 11:33 AM

Katie Lady said…
My pleasure on the clothes! Hope everything fits!

Belly button will pop out eventually, unless you are one of those crazy-small people (oh wait, you ARE!) and don't get too huge. Mine went back in within a few weeks time, but the 'line' will be there a while.