March 10, 2010
If you've been playing along, we obviously didn't get married in a church. I wasn't really feeling the typical "churchy" readings either. After a lot of searching, we came up with two that fit us (and our readers) pretty well.

First up, one of my friends from college. I was in her wedding a few years back. She's a former elementary school teacher who now works in a library. This was a perfect fit for her and she did such a great job presenting it--excerpts from I Like You by Sandol Stoddard Warburg (punctuation and formatting added by me to conserve blog space). 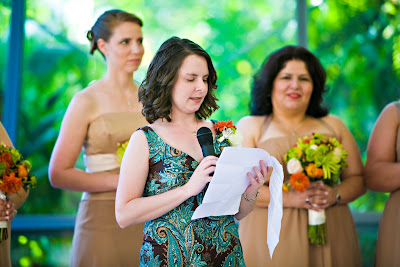 If you go away, then I go away, too. Or if I stay home, you send me a postcard. If I go away, I send you a postcard, too. And I like you because if we go away together and if we are in Grand Central Station and if I get lost, then you are the one who is yelling for me.

And I like you because when I'm feeling sad you don't always cheer me up right away. Sometimes it is better to be sad. You can't stand the others being so googly and gaggly every single minute. You want to think about things. It takes time.

I like you because if I am mad at you then you are mad at me, too. It's awful when the other person isn't. They are so nice and hoo-hoo you could just about punch them in the nose.

If you find two four-leaf clovers, you give me one. If I find four, I give you two. If we find three, we keep on looking. Sometimes we have good luck, and sometimes we don't.

I like you because I don't know why but everything that happens is nicer with you. I can't remember when I didn't like you. It must have been lonely then.

I love so many things about that little children's book. We were trying to delete parts so that it wouldn't be too terribly long but it was so difficult! I mean the traveling part since I was on the road so much during our courtship. And the four-leaf clovers since we were honeymooning in Ireland. And "even if it was August" since that's when we were getting married. So, yeah, it was a long reading but it was enjoyable to hear.

Next was one of Hubby's good friends from college. He's currently in med school so he couldn't commit to the time off to be a groomsman. We would have hated to have him not be able to come at the last minute. But luckily he was able to make it and we had him do a reading. It oddly fit him, too. His reading gave credibility to the words. This one is Union by Robert Fulghum.

"You have known each other for years, through the first glance of acquaintance to this moment of commitment. At some moment, you decided to marry. From that moment of yes to this 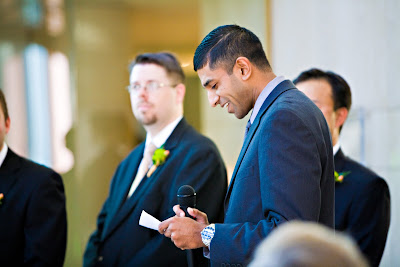 moment of yes, indeed, you have been making promises and agreements in an informal way. All those conversations that were held riding in a car or over a meal or during long walks--all those sentences that began with "When we're married" and continued with "I will" and "you will" and "we will"--those late night talks that included "someday" and "somehow" and "maybe"--and all those promises that are unspoken matters of the heart. Just two people working out what they want, what they believe, what they hope for each other. All these common things, and more, are the real process of a wedding. The symbolic vows that you are about to make are a way of saying to one another, "You know all those things we've promised and hoped and dreamed--well, I meant it all, every word." Look at one another and remember this moment in time. Before this moment you have been many things to one another--acquaintance, friend, companion, lover, dancing partner, and even teacher, for you have learned much from one another in these last few years. You have learned that good company and friendship count for more than good looks. And you've learned that marriage is a maze into which we wander--a maze that is best got through with a great companion. Now you shall say a few words that take you across a threshold of life, and things will never quite be the same between you. For after these vows, you shall say to the world, this--is my husband, this--is my wife."

I haven't read those words since the wedding. Still love them.

Up next? The musical entertainment.