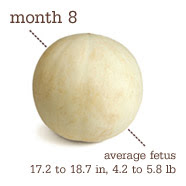 Total weight gain: About 26 pounds. A pound a week is kind of a scary proposition at this point...

Cravings: Nothing major but it seems like I'm enjoying carbs and sweets more. And The Hubby thinks I'm preferring more bland foods.

Symptoms: Crazy dreams, baby brain, forgetfulness, lots of waking in the middle of the night, more frequent crazy back pain, slightly less frequent hip pain from sleeping on my side, good hair, some pressure from baby settling and ligament pain, general feeling of uncomfortable-ness is getting more frequent, more daytime pottying, Braxton Hicks (a more reasonable amount). One dream last night had Hubby telling me that he wanted to add "Nora" and "Maude" to his girl name list.

Preparations: Another coat of paint on the dresser. I think I just need to do one more and I'll be done. I think that will have to wait till Wednesday when it gets warmer (again). I also moved the rocking chair into the nursery (finally). And that's about it...

Milestones: Another doctor's appointment this week. I felt some validation on the belly-popping front. I had been consistently measuring about a cm/week small but was right on target at this visit. Maybe that little growth spurt contributed to my feeling worse last week. Although I don't feel unburdened by the belly this week, I've certainly felt better than last week. Also, I know I mentioned this on FB, but I apparently went from strangers not being 100% sure I was pregnant to being asked if I think I'm going to make it to my due date. It seems that I had about a week of being an appropriate amount of pregnant.

Weekly wisdom: I'm kind of tapped out this week. A couple of thoughts, though. First, I'm not sure if having a January baby is good because Christmas can take your mind off of things and help the time go by faster or bad because Christmas comes with its own To Do list and it, uh, makes time go by faster. Second, I keep forgetting to mention it but my due date was adjusted to 3 days later. So instead of Saturdays being the conclusion of a week, it should really be Tuesdays. But since I made it about 3/4 of the pregnancy before finding this out, I'm going to stick with Saturdays (or, you know, Sunday).

I'm either smuggling a baby or a basketball (all the while making crazy faces)... 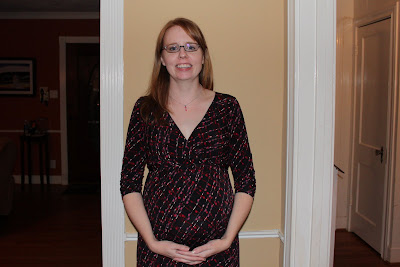 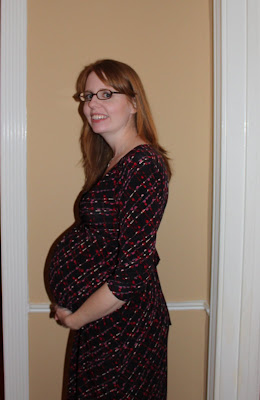 Katie Lady said…
Ooh, look at that cute belly! I wish I was there so I could ask if I could touch your belly. :)

Three Peas said…
So funny you made that basketball comment, I made the same comment 2 days ago to a friend.