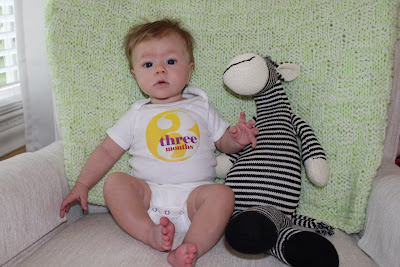 Maybe I should start by saying your dad has given you your first nickname that's coming from him. It's Starbit. Maybe it will make you love Super Mario Galaxy on the Wii. You have a Mii on the Wii so that we can weigh you on the Wii Fit game. Your name there? Baby bear. And sometimes I've taken to calling you Scarlettina. Or if I'm talking to you and Maggie, you two are Maggie May and Scarlett Sue.

So many changes have come this month! In one of the childcare books I had read before you were born, the author stated that when people picture a baby they often picture a three-month-old instead of the much less developed newborn. I can totally see why. Those smiles that were only for me last month? You give them away for free these days. You also talk a lot more and are awake even more. You're really starting to get fun.

You're also bigger. I'm guessing close to 13 pounds now. When I tried to measure your length recently, you seemed around 24 inches. We'll have to wait one more month to have the doctor's office officially take your measurements.

Another first this month was your first poo strike. I had to have a few procedures done (one of which required sedation) so you ended up with three straight formula feedings. It was good practice to starting daycare (more on that later). Yep, those 3 feedings seemed to cause you not to poo for SIX DAYS. If you were an adult you'd be very disturbed by this but babies don't really seem to mind. I called the doctor's office to see what they had to say about it and we ended up giving you a little Karo syrup in your bottle and it cleared you right out. You were a bit of a mess but at least I was expecting it and we were home. I did, however, get poo on my wedding ring. Since your grandmother (my mother) also wore these rings, I was struck with the thought that they've likely seen poo before. I love having that tangible connection to my mother (more so now that you're here).

Chicken, I'd like to insert here that we rarely discussed poo in this house before you came along. Even less so before Maggie.

So, yes, Mama's had to have some procedures done. In a few weeks I get to have surgery for the first time. Now I'm not blaming you, just pregnancy. :) I'll be happy to feel better afterwards and really hope everything goes smoothly. I've been told I won't be able to pick you up (or anything over 10 pounds) for 2 weeks. Somehow I doubt I'll follow that rule.

You know, most people haven't had my experiences with death. We are fortunate enough to live in a part of the world where it's relatively rare to have a parent die when the child is as young as I was when my dad died. I say this to tell you that I'm no stranger to it. I've thought about mortality most of my life in ways that other people my age probably didn't. That said, nothing changes your perspective on life and death quite like having a child. I'd hate for something to happen to me now or when the inevitable happens (hopefully when I'm an old lady). I don't want to leave you in that way. I can't imagine how my dad must have felt when he knew that was coming in his own life. It was probably worse than the pain we felt as the kids left behind. Sorry to get so deep and sad, little Chicken. Just want you to know where I am with this parenting gig right now.

Slightly less deep... Your dad and I went on our first date night since you were born. Your grandparents watched you for us. When we got back to pick you up, your grandmother said that when she looked at you that evening she saw your father. She even pulled out his baby book to compare. Let me tell you, you look just like him when he was a baby. All along people were saying that you had my nose and mouth. In reality, I think you have my eyes and that's about it. We'll see how you change as time goes on (something I'm greatly looking forward to). I hope you are at least a good balance of the two of us. (But you can favor me more if you'd like.)

This month you went to your first baseball game. Astros' Opening Day at Minute Maid Park. I wonder if we can get you to Opening Day every year of your life? We'll do our part. Eventually it will be up to you. You also "ran" your first 5k. I carried you on my chest and I didn't even run so those quotations are more than justified. We were really slow but it was a start.

So many firsts... The biggest and by far most difficult for me was going back to work and leaving you at daycare. Sob. I thought I was so prepared for leaving you. I had all the supplies in two piles--one for daycare and one for your grandparents' house. Sure, I forgot a few things but quickly remembered. I knew I wasn't ready to go back to work but I felt pretty good emotionally about leaving you. I had left you with people before. I was fine then. Well, I left you at daycare and as soon as I walked out of the building I started crying. I was really surprised by it. That first day was hard. I had difficulty concentrating and would leak a few tears off an on. I kept you home on Tuesday and Friday to kind of ease into things. Wednesday and Thursday were much better.

You, on the other hand, were a champ. You charmed both of your caregivers (Ms. Gwen and Ms. Doris). They told me how cute you are and what a good baby your are (despite pooping all over Ms. Doris on your second day). They're such nice ladies and I think they'll treat you right. I'm glad we went with this daycare but am still sad we have to be apart so much.

Well, Chicken, today is Easter Sunday and the official beginning of your 4th month. I'm most looking forward to hearing you laugh. I think I heard a tiny "sleep laugh" last night but your daddy doesn't believe me. I might remind you that he said the same thing about your first smile so fingers crossed that laugh is coming soon. Just that glimpse of it broke my heart wide open. Again. Something tells me it won't be the last time. 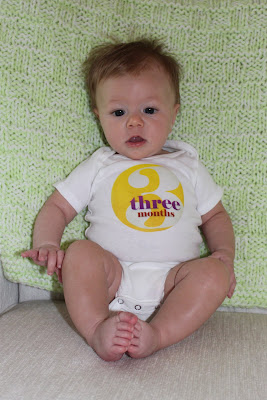 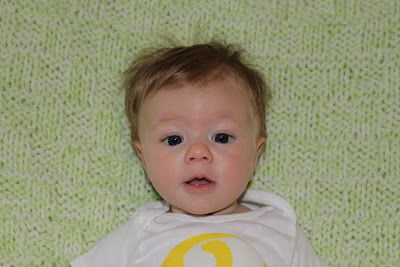 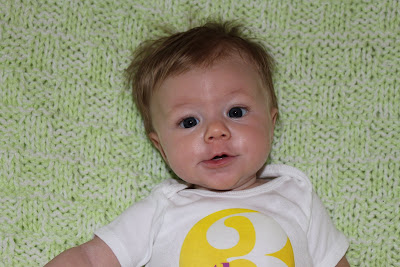 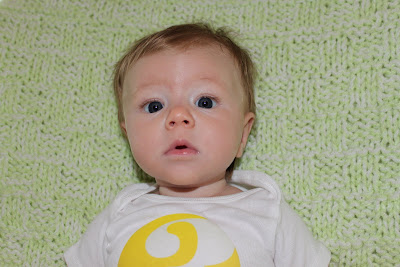 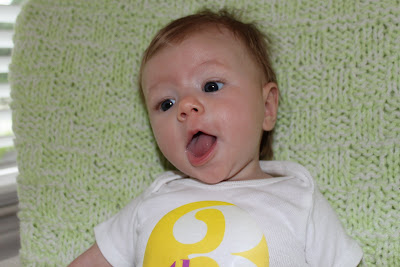 StaceyG said…
LOVE the nickname Little Chicken! Poor Alexa had to endure Pug, Punkin (I still call her that) and a plethora of "one-week wonders," the names that didn't stick. The first day of daycare is heart-wrenching...I don't care who you are! But as you know now, the love for a child is indescribable! Enjoy...your Little Chicken has a terrific Mama! (and I'm sure a terrific Daddy too since Mama has great taste!)
4/25/2011 10:00 AM

cjm said…
She kicks a lot when in her bouncy chair so she's often "kickin' Chicken." And since she's so happy now, sometimes "chipper Chicken" (a la Martin Short's character in Father of the Bride when he's trying to say "cheaper chicken). Oh, and she said her first word the other day--haiku. :) I think it was a fluke...
4/25/2011 10:09 AM

Loretta said…
Love the Blog! Great way to chronicle the early years (flash). And the monthly pic with size perspective is a treasure. When my Bunny came along, I took her picture every Wednesday with a clock for 52 weeks, and often around 4:10 p.m. My intention was to print them in a small book and flip through them to "watch her grow." Never made them into a flip book, but the project did make an great booklet and poster keepsake. (Now if I just knew where I put them...)

As you know, I relate to the whole immortality thing and mourning that I am raising my little one without 3 of her 4 grandparents. It still hits me very hard sometimes. So many questions I'd love to ask my mom. So many times I've wondered how The Bunny's milestones compared to mine. Worrying when our own departure from her lives will shatter her. I have also surprised myself with never directly telling her my parents have died. I guess I am not ready for her to know that we are going to leave her someday, and albeit unlikely, that it could be soon. She is just too little. I was just too little. I do tell her that I would NEVER choose to leave her. I try to talk about my parents more these days. She has never asked where they are. I think she just knows.
4/25/2011 12:05 PM