We woke up yesterday with the titles of Boyfriend/Girlfriend for the last time. It was a slow, easy start to the final day of a good long weekend. We piddled around, he setting up a wifi connection in my office and me working on Christmas cards that remain unfinished. Did some laundry. We were planning on doing a little Christmas shopping since our preparation has been condensed by a week because of our pre-holiday travel. Set out to start our errands...

He had mentioned that he wanted to go to the rum distillery (first one in Texas) that's about 10 miles from here. That was our second stop. Neither one of us had been there. It was supposed to be the site of our first date but the distillery was still too new for tours back then so we had settled on lunch (and endless chatting) instead.

On the way there, I reached into the glove compartment to get my GPS and there was a towel in there. Since I hadn't put it there, I asked him what it was and if I needed to be concerned about him smuggling drugs into my car. He told me not to open it and I didn't. When we got there, it turned out to be a plain, metal building at the end of a not-too-scenic street. Not very romantical. So he got back in the car (I never got out) and we drove off.

I mentioned that I wanted to drive by the water to see if the restaurants were still there (post-Ike). They were. He ended up parking by the water and we got out into the much more blustery day. We walked down by the water and onto the newly rebuilt pier. It was just too cold and windy to stand out there so we walked back to the car. He opened my door and then reached in to the glove compartment to grab the towel, took out what was inside, and was on one knee. He asked me to marry him and I said yes.

And I thought, "That's it." Not that's it as in "that's all" but more like that's all it took to change both of our lives forever. That's it like you're waiting for a milestone birthday and all it takes is for you to go to bed when you're 29 years and 364 days old. You wake up the next morning and you're 30. That's it like he asked a question and I answered. How many times had we done that before? It seemed so simple.

I'm still surprised that I didn't make a joke or hesitate or feel like I needed to throw up or anything. "Will you marry me?" Yes.

So the cool part (because, you know, that wasn't cool enough). About a year ago we had talked about the fact that I just wanted Mom's rings. At some point, I showed him where I kept them and he could just steal them as needed. I was pretty good about not checking to see if they were gone until we were evacuating from the hurricane. I grabbed Mom's jewelry box (which is one of my few absolute items to save). Turns out the rings were gone. Amidst my already frantic state, I had a little panic attack. In a good way. But I didn't tell him I knew they were gone.

He had taken them to his mom's jeweler to have them cleaned up and re-pronged. They look fantastic. He also had them make a duplicate of the engagement ring. He put that inside of a snowglobe (which I've been collecting for a few years) that he had ordered online and filled with sand from our trip to west Texas. That's what was in the towel. That's what he presented me with while down on one knee. That's what he told me I had to break in order to get the ring. I didn't really think I'd have to break it. I figured that he had to have put it together; he could take it apart. But it was cold so I asked if we could get in the car. Then he showed me the real rings. Mom's fingers were bigger than mine so we dropped them off yesterday for resizing. I'll get them today. And he can put it on my finger for good this time.

I love you, Fiance. 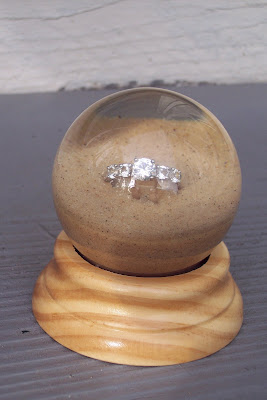 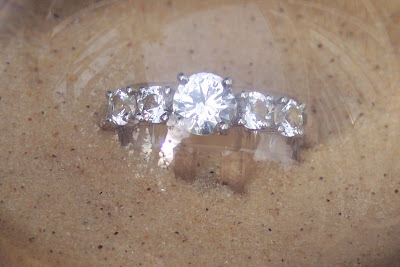 Anonymous said…
I am so happy for you both. I just knew you were the right person for each other from the very first time I met Wyatt. Congrats!

Carrie Morgan said…
How wonderful! The fall is such a romantic time of year. We could not be more excited! -Carrie Garner Morgan
12/01/2008 8:44 AM

Anonymous said…
Oh my! That is great news! Congratulations to you both.

Anonymous said…
"A" for Wyatt's engagement plan and effort! I'm not surprised, but very happy for you both. Congrats!

klm said…
Ooohhhh, I remember it even more now...cling, cling. :)

Beautiful! I cannot wait to see the real deal on your hand.

And two thumbs up on the snow globe! Way to go Fiance!!!

Katie Lady said…
OMG, congratulations!!!! I am so, so happy for you! I knew he was The One when we got to meet him, y'all are just too perfect for each other.

Anonymous said…
I am so excited for you!!! The two of you make such a cute couple. Congrats!!! Let me know when I need to schedule our flight to come down for the wedding. Love ya,

Anonymous said…
snifle... my eyes are still leaking. in a very good way. i can not put into words how happy i am for you and W. from the bottom of my heart: congratulations.

Icey said…
I am visiting from KLM's site.

Jillie Bean (AKA Bubba's Sis) said…
How absolutely beautiful and perfect! I got teary, too! I LOVE LOVE LOVE the snowglobe!

helen said…
To our Little Red Head
You know you have some competition now. Luke and Robyn's baby has fun red hair and is always laughing and cuddly. We are very excited for you. I sent you a long e-mail to your hotmail account but it didn't work. Let me know how I can send you the long version. Love ya lots Jay and Helen
12/05/2008 8:37 AM

StaceyG said…
Congratulations! I heard this from Tammy Fountain the other day and just now remembered to check your blog. I am so happy for you - you who thought you'd never find "the one"! =)
12/05/2008 7:48 PM

Anonymous said…
That ring is so beautiful and I love that he put it in the snowglobe. Wow.

My engagement ring is my mom's engagement stone--my dad died when I was three so she gave me her stone and we had it re-set. It's good to have tradition on your fingers. What a wonderful story to tell your kids.